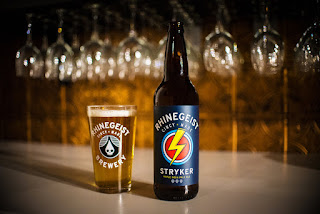 Rhinegeist Brewery is one of our local Cincinnati breweries and one of the beers I often enjoy from them as somewhat of a favorite is their Stryker. The beer itself is a Triple IPA with an alcohol content of 9.3% ABV and an IBU level of 100, which usually plays out as nowhere close to that. With notes of citrus and resinous tones, this beer is usually a stand out especially with the passion fruit flavor which usually comes through.

The beer itself named after one of the lead brewers is offered only during a certain time of the year, so if you happen to see it then it is often best to get it before it disappears. I am looking forward to checking out the 2017 edition, so join me by watching the video below and grab a cold one so that you too can “Get Your Beer On.” Cheers!