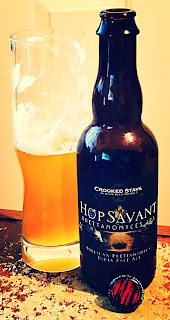 From Crooked Stave Artisan Beer Project out of Denver Colorado comes the Hop Savant Amarillo Brettanomyces IPA, a sour IPA with an alcohol content of 7% ABV and this is my look at this ale that I acquired on a recent beer run. I had heard a lot about this brewery, so the fact that I was now able to find one that somehow reached one of my beer stores was downright awesome. So here are some of my thoughts on this beer which you will see below or you can also scroll down to the YouTube video if you would just like to watch.

Well in looking at the beer, I have to admit that I did like their labeling of the beer and it did provide some of the key details. One thing noticed was that they placed details for the best temperature for enjoying the beer. That’s always a nice thing to know and for this beer, the desired temp was between 46 to 54 degrees Fahrenheit. As for the beer in the glass, it poured out a nice hazy golden color with a large foamy white head. The head was actually larger then desired, so I did have to let it settle for a little bit. Why this took place, I was able to get a good sampling of the aroma and the notes of the beer. The Amarillo hops came out easily but there was also the funkiness and sourness of the brettanomyces as well. But it wasn’t like a tart sour, but more of something almost like sour milk but just not as bad. I mean really, funky is the best word in describing it.

The tasting of the beer was solid though as it carried all of the usual characteristics of an IPA. There was a citrusy feel as I received orange as well as a piney and earthy feel. There wasn’t much if any of grapefruit which is common in IPA beers, but think of that being replaced with the brettanomyces as well. That sour taste sat on the tongue but unlike the aroma, it was more pleasant for me. Medium bodied and somewhat dry, this ale did provide a nice overall crisp texture and solid taste.

Overall, I found this beer to be one of those unique ones. I had another much more straight forward variant of this ale and for me that one would be more to preference. That being sad, I did enjoy the ale enough that I rated it 3.25 out of 5 for my Untappd score. You can definitely tell it was an IPA as pretty much mentioned earlier, but again that funkiness just was a standout for me. How about you? Have you had this beer? If so then leave a comment and let me know what you thought. That all being said, thanks for stopping by to check out my post and if you like then catch my YouTube video below as well and catch a little bit more tidbits about this beer. Cheers and Get Your Beer On!