Corruption Release And Other Things With Wooden Cask Brewing 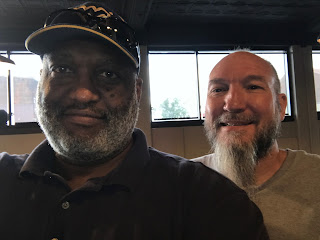 I had a chance to catch up with Randy Schiltz who is owner and brewmaster for Wooden Cask Brewing Company here in Newport, Kentucky. He and his wife Karen had invited me to come by to check out their new release of Corruption which will be released on Saturday, June 17th. This video is our discussion around the beer and some of the other happenings at Wooden Cask, as well as some discussion around the craft brewing industry.

As for the beer itself, Corruption is a barrel aged version of Reformation which is Wooden Cask’s Scottish Ale. This version will be offered at an ABV of 10.2% and will be offered on draft or in bottles. You can see my take on this beer in the video but to give you a short synopsis, the beer is very smooth and does well providing good tones in both the aroma and taste. The beer was well blended and the tastes of vanilla and chocolate come out very easily. It isn’t overdone in any way and for me; it left a smooth and tasty experience. This one will be a dangerous one for some. I will provide a more in depth separate review as well, but you will be able to see much of those notes here too.

Disclaimer: Beer was provided by Wooden Cask Brewing for this sneak peek release and opinions are that of my own and in no way influenced by the receiving of the beer in this preview. I stand by all comments made.