Give Me Five With Arbor Brewing

Back in 1995 in Ann Arbor, Michigan, a small brewpub began their current journey of brewing beers. With time and hard work they have now grown to having that location plus a microbrewery in Ypsilanti, MI and even a location in India. That's right, not Indiana but India. There was no typo. Beer can do that sometimes. It can transcend the states, countries, continents and even the world.

My experience with Arbor Brewing came from a recent discussion that took place at Cincy Beerfest back in February of this year when I had the opportunity to speak with Chris Bailo. Chris serves as the branch manager for Ohio and we had a chance to discuss some of the beers and featuring Arbor Brewing for the blog post which you are reading now. Chris was awesome and was able to place me in touch with Matt Greff who is the proprietor of Arbor Brewing, and together we were able to come together for another "Give Me Five."

"We established Arbor Brewing Company brewpub in 1995.  At the time we were only the 7th brewery in Michigan.  As a brewpub in Michigan we could not sell our beers for distribution, only at the brewpub itself.  In 2006 we opened Arbor Brewing Company Microbrewery under a different license that allows distribution of our beer.  Our beers are currently available in all of Michigan and Ohio."

2. How did you come about starting the brewery?

"Matt Greff, the founder, studied abroad in Hannover, Germany in college.  He fell in love with beer in Germany and began homebrewing upon his return to the U.S. in 1991 in order to recreate some of his favorite German-style beers.  Matt and Rene (his wife and co-founder of ABC) had corporate jobs out of college and decided to have an “Early Life Crisis” and do something they loved as opposed to grinding out a corporate career.  Through friends, family and co-workers they raised the necessary funds to purchase an Ann Arbor restaurant out of bankruptcy and turn it into Arbor Brewing Company Brewpub."

"1. Commitment to environment.  We were the first solar brewery in Michigan and our 2,200 sq ft warehouse is geothermal temperature controlled.  The first year our solar panels were in use our beer production was up 25% our electricity and gas use was down 25%.  We are pioneers in the locally grown and sourced food movement starting back in 2005 and one cool thing is we buy our beef from the farmer that uses our spent grain to feed to his cows.  We also have our own garden at the brewery that supplies about ¾ of our produce during growing season."

"2. Our sour beer program is now 15 years old.  We were the first brewery in Michigan to produce sour beers in 6 oak casks starting back in 2001 and we now have over 120 oak casks and are going to continue to grow our Wild Roots sour beer program."

"3. My first beer love was a very hoppy northern German pilsner that I discovered while studying in Germany in college.  For that reason I have a passion for Lagers and European styles and a direct result of that is our Euchre Pilsner which is a 43 IBU 5.5% ABV lager that is selling like crazy."

"4. As a brewer and brewery, we have a “beer first” mentality. Even our offerings that have additional ingredients added are balanced so that it is beer you are tasting and the notes of coffee, or strawberry, or cherry, or whatever extra ingredients we are using are there to accentuate the beer not hide it."

"1. Adopting or creating more environmentally friendly procedures.  This is an ongoing passion of ours and the possibilities are endless."

"2. Reaching a larger global audience who have not experienced the renaissance of true craft beer both here and abroad.  We currently have the only American craft brewery in India with our brewpub in Bangalore and late this year we will be opening the first American distributing brewery with the opening of our microbrewery in Goa, India."

"3. Placing an emphasis on our sour program which already has a huge fan base."

"Over the course of a year we make around 100 different varieties of beer.  For distribution we offer 4 year round beers, 3 seasonals, 4 Specialty Releases and 4 Limited Releases plus sour beers when they are ready to go."

Wow, as you can see there are a lot of good things taking place with Arbor Brewing and if you haven't check them out and have the opportunity to do so then I suggest that you do. Find out more about Arbor Brewing here on their website: http://www.arborbrewing.com. And for a listing of their beer offerings for 2016 those can be seen below for your convenience.

Thank you Matt and Chris for providing the details on the brewery. I know I am looking forward to trying your beers and wishing you great success moving forward. Cheers! 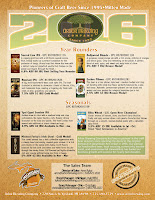 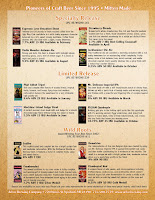