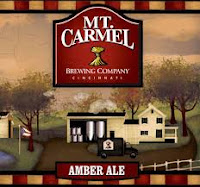 Mt. Carmel Brewing is located in Cincinnati, Ohio, and this brew is one of their year round offerings. I had a chance to taste this one a few months ago during a visit to one of our local bars, but I am now just getting around to writing a review from my notes from that time. Although Mt. Carmel has a very good line of beers from what I have sampled, this one didn't come across to me as being as appealing as some of the others. I found it to be solid, but just not as great as some of the others that have reviewed this beer.

The beer itself had a faint hop aroma, I had to really get into the glass to pull out the notes and scents. The texture came across a little more watery then I like as well. But the taste, now that was smooth. It did have a little more bitterness than expected, but it took nothing away from the beer.

The color of the beer is a nice amber yellow and provides a decent appearance. Carbonation was okay, and the bitterness as previously mentioned, does hit the tongue. The mouthfeel was okay and came in as a medium bodied one. It also did leave some nice lacing on the glass.

Overall, it proved to be a solid beer and worth a shot. And with that being said, I rated this one a B.
Posted by Unknown at February 06, 2016