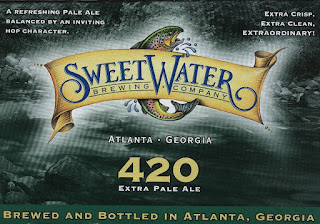 I had enjoyed this bottled beer at one of my local spots here in Kentucky. There wasn't much of a head that poured from the bottle and as expected with the pale ale style, it was highlighted by a golden haze. As for carbonation, not too much was happening as it was soft. The aroma was also a little faint and had notes that resembled a sourness. But how about the taste, in the end that's the most important factor.

The texture was watery and it provided both an okay mouthfeel and duration. But there was nothing that really stood out about it. The beer was decent enough, if you are looking for a beer that will be refreshing with some crispness on the finish. But, with so many pale ale choices, this is just not one that I would probably seek again. As a side note, it did provide some lacing as well.