The Art of Cellaring Beer

A good many beer enthusiasts get into the habit of cellaring beer, which can be a great way to learn how to smooth out flavors over time. But in doing so, a person has to know the right kid of beers to cellar. For instance, a common rule is to choose beers that are at least 8% ABV. But, that is only a baseline as it should also be the right kind of beer. For instance, hop heavy beers such as IPA's will lose some of their bitterness over time and although they will be drinkable, they won't most likely be the expected taste that is desired.  But, cellaring more malty and lower IBU beers can create a more distinct taste as the flavors open up over time. For instance, here is one of the beers that I have cellared recently: 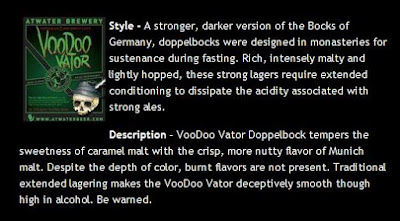 As indicated Voodoo Vator over time becomes much more smoother and in fact, the taste of the alcohol was lessened even more then when fresh. So what should you know about cellaring?

These are just a few things to keep in mind and I hope you do decide to adventure out into the cellaring world. With some of the great things being done with  craft beer, it is definitely worth giving it a try.

Cheers and Happy Drinking!
Posted by Unknown at June 23, 2015