On Tour at Urban Artifact 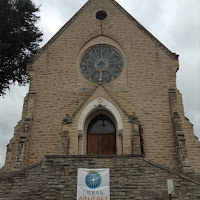 This past Saturday, I finally had a chance to get out and visit Urban Artifact which sits on the North Side community of Cincinnati. A spacious and currently being renovated old church is what is now this home for sour bases beers. The church was purchased last year and the brewery was able to open earlier this year. I was able to get a chance to tour the brewery and have a more reflective talk with Scott Hunter who is their Chief of Strategic Development and of course, finally get to taste their offerings.

First, before talking about the beers, I feel that I should describe the feel of the brewery as they have a lot of good things going on. Now, I am not one that usually goes to church, but this is the kind of mass that I can get into for sure. The church itself was built around 1873 and was active until 2008. I mentioned spacious earlier, and it is. There will be a floor that will act as a reception hall and is slated for completion for next year. And, they are currently in talks to have a restaurant on the premises. I mean this place is spacious. 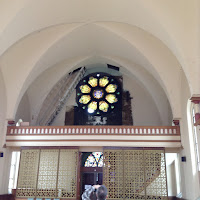 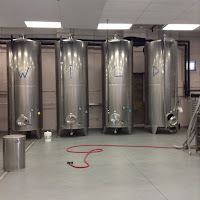 As for the brewery, that is kept in separate building in the back and also bolsters a lot of room which is great for all the maneuvering done with the making of the beer. A good thing is that they are separated which helps for oversight as well as regulations. They also use a unique process for their sour mash which helps to balance out the acidity. They are careful to use all fresh hops and like to experiment with one off beers as well. While I was there, I was shown one planned for a Christmas release later this year, that was being aged in Bourbon barrels and will be a tart stout. I will be back for that one. Currently, there is no packaging for cans or bottles but that is in the works and in the tap room, one can get growlers to take home. 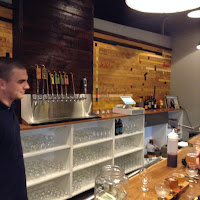 But getting to the tap room, that is located in the basement, you will have a variety of things to do as well. Drink beer, obviously, but you also have various board games available and as I mentioned a location for live acts to play on stage.One thing that patrons like is to create their own beer experiences by adding various flavorings to their beer. Essentially, you are given the choice of various flavored liquid that you can add to your beer to enhance the tartness or even cut it as a hops blend liquid is also a selection. It can be kind of fun as people can customize and experiment to make their beer their own. There was also various artwork that was on display for purchase by local artists which was neat, but a thing that stole my eye was one their recycling of many things including the copper pipes for the bar taps. But the bar itself was a neat feature, it was wood that was had what seemed to be metal glass burnt into the cracks where under the class was malt seeds. It really added some character, so if you go then make sure to check that out.


Another key thing that I didn't even notice until it was mentioned was the lack of televisions there, and it was kind of refreshing as people actually communicated. Imagine that, conversation being the focus. As far as food, they don't serve any currently but there are advertisements for places that will deliver and during some events they will also have some of the food trucks on hand. All in all a great place to chill and hang out and look forward to coming back to check out an act as well.

Oh yeah, the beers, that may be important, lol. Well, they had six on hand although one was on its way out to be replaced by a double IPA which was being released tonight on June 30th. And two of the beers do have a nitro option to enhance them and of course were the ones that I chose. But the list was as follows:


I will be adding a review for each of these but the Keypunch is a key lime Gose and surprisingly ended up barely being my favorite over the Kodiak which was a great sour ale infused with coffee flavors.

Thank you to Scott for the tour and time to talk, as well as to Emily and Chris who were there to provide the refreshments and did a great job of sharing details as well.

Since the time of this writing, I have also learned that not all beers will have a sour component at Urban Artifact as previously thought. Some beers are actually brewed as wild beers that use wild yeast. These beers complement the tart ones and are the two styles featured.
Posted by Unknown at June 30, 2015