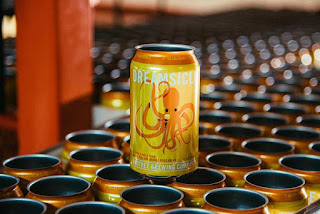 CINCINNATI (August 28, 2017) – What began as an innocent April Fool’s joke in 2016, turned into MadTree Brewing making beer lovers’ dreams come true. The brewery had long served Dreamsicle, a light kölsch style ale with orange and vanilla, in the taproom and it was consistently a top seller. However, when they jokingly released a rendering of the beer in can form, with a whimsical octopus holding an ice cream cone, MadTree fans erupted with approval. It wasn't until it was revealed that the can was just a prank that the public expressed a range of emotions from disappointment to outrage.

The brewery received phone calls, emails, and social media messages daily asking when it would be canned. Author Rick Armon named Dreamsicle one of the “50 Must-Try Craft Beers of Ohio” in the soon to be published book of the same name. There was even an online petition drive that garnered hundreds of signatures. Eventually, MadTree decided it was time to begin canning the beer once they had the production capacity to do so.

“Dreamsicle was one of those beers created on a whim by the brewers that really caught the attention of taproom patrons,” said MadTree Brewing graphic designer, Nicki Logsdon. “We thought it would be a funny April Fool’s Day prank to act like we were going to can it, so I came up with what I thought was a ridiculous octopus eating an ice cream cone design. The response was a bit overwhelming, to say the least, so we decided to roll with the now famous octopus.”

MadTree will hold a can release party on Thursday, August 31, from 4PM-8PM in the MadTree taproom (3301 Madison Rd, Cincinnati, OH 45209). Catch-A-Fire Café will offer some special menu items, along with their full menu all day. There will be a purchase limit of one case of cans per person. The cost is $10.50 per six-pack (including tax).

Can and draft distribution to restaurants, bars, and retailers will begin Friday, September 1, in most markets that MadTree serves.

About MadTree Brewing Company
Cincinnati’s MadTree Brewing made history when they opened in 2013 by becoming the first modern craft brewery to can its beer in Ohio. In February 2017 they opened a new $18M brewery, taproom, beer garden, and private event spaces in Cincinnati’s Oakley neighborhood. MadTree is known for focusing more on great tasting beers rather than following traditional brewing style guidelines. Their award-winning beers are distributed throughout Ohio by Cavlier Distributing and throughout Kentucky by Beer House Distributing. For more information about the beers, brewery, and taproom, visit madtreebrewing.com or connect with them on Facebook, Twitter, Instagram, and Snapchat.
Posted by Rod J at August 29, 2017